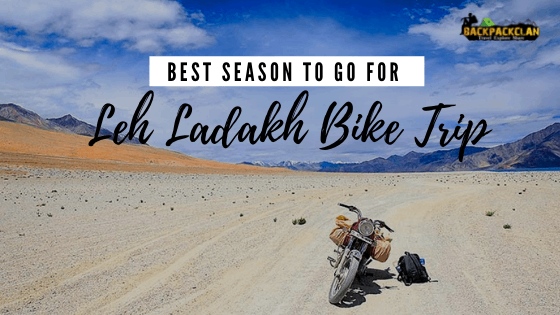 In order to enjoy your trip to the fullest, it is crucial that you explore the place at its best. Below we’ve discussed in detail the weather in Leh and Ladakh during different seasons. Make sure that you go through it thoroughly before booking Leh Ladakh Package for yourself.

Marking as the beginning of the tourists season, Leh Ladakh begins to receive tourists from all over India as well as the world from April onwards. During this time restaurants, hotels and guest houses offer heavy discounts in order to attract more customers to Ladakh. Moreover, many agents offer great deals on Leh Ladakh packages at this period. Also, by the end of April, the Pangong Tso and Tso Moriri Lakes start to melt, further uncovering the turquoise colour and mesmerizing views. However, both Chang La and Khardung La pass remain covered with snow during this time so they are inaccessible during these months.

During this time the Srinagar-Leh highway also opens up, thereby giving a route to the road travellers. Moreover, in early June, one can choose to travel from Rohtang Pass too. However, due to the rapid melting of snow, the roads tend to remain wet and slippery but the sides are covered with snow and this path is certainly a once in a lifetime view to the travellers.

These months experience monsoon and during this time the rivers are full of fresh water and also the weather is cold. However, it is definitely risky to travel at this time of the year due to landslides and slippery roads. But passes like Zoji La Pass and Baralacha Pass are rain shadow areas that receive less rainfall, thereby making Ladakh accessible during these months.

The whole place is filled with beautiful colours at this time of the year. During this time, the levels of water recede too and also the weather is dry with occasional snowfall bringing a bit of chill. In addition to this, the roads are in better condition after maintenance due to rainfall during this season. Yet another major advantage while travelling during this time is that you get to witness the Ladakh Festival.

By this time, the place is entirely in sub-zero temperatures at all the locations above 14,000 ft. Also, the tourists tend to leave the place by this time and restaurants get closed too, thereby abandoning the place till winter.

During the winter season, tourists usually come for the famous Frozen River Trek or the Chadar Trek. Though roads through Nubra Valley and Pangong Tso are open in winters also but the temperature dips real fast during these months, thereby cutting off Ladakh from rest of the parts of India.